Mario Tommasino, 85 of Scottsdale, Arizona passed away on Thursday, March 5, 2020 at his home. He leaves behind his precious wife Italia Tommasino, whom he was married to for 61 years, sons Louis Tommasino, Alex Tommasino, daughter Gina Tommasino, grandchildren, Michael Mario Tommasino, Shaina Tommasino, Matthew Tommasino, Natalie Tommasino, Brandon Anthony Tommasino, and Nicolas Becceril. He leaves many relatives in Italy, Australia and Pittsburgh, PA. Mario immigrated to the United States in 1962. He was born on August 15, 1934 in Coreno, Italy, a small village town located in the region of Italy called Lazio, south of Rome. Mario grew up during World War II. He experienced at a young age the invasion of the Nazi German Army and the hardships of being a war refugee. After the War his town was destroyed and he experienced poverty. As a young man Mario served in the Italian military. After military service he moved to Lugano, Switzerland where he learned to cook in the hospitality industry. Mario trained to be a barber and hair stylist when he returned to Italy. On September 10, 1959 he married his childhood sweetheart Italia Tommasino who was also from his hometown of Coreno. In 1962, Mario immigrated with his wife Italia to the United States, in Cleveland, Ohio. In Cleveland Mario and Italia started their family and had three children Louis, Anthony, and Gina. Mario worked as a barber and eventually opened his own barbershop. After saving some money, Mario and Italia purchased a home in Cleveland. In 1965 Mario and Italia Tommasino moved to Colorado where the family grew up. Their fourth child, Alex Tommasino was born in Denver. After moving around within Colorado, Mario settled in what was a small town back then called Broomfield, Colorado where they lived for 12 years and the kids (except Alex) finished high school. Alex finished high school in Scottsdale, Arizona and the Mario family's current home. Mario continued to be an entrepreneur, owning his own barber shop and real estate properties. Mario later moved to Arizona where he opened an Italian restaurant in Kingman, Arizona and a barber shop in Scottsdale, Arizona. Mario believed in America and the opportunities that it offered to immigrants. He was a proud man who worked hard and always took care of his family. His entrepreneurial spirit helped and made him proud of being an American. He bought American cars and always praised the U.S. when he visited his hometown of Coreno, Italy. Mario enjoyed gardening, cooking, fishing in Colorado, hunting and remodeling his childhood home in Coreno, Italy. He especially enjoyed spending time with his children and grandchildren. He was proud of all his children, always telling his customers of their accomplishments. Mario represented what America was about, a proud immigrant who came to the US with nothing and built a solid business through hard work and perseverance and raised a beautiful family. Unfortunately services are postponed and will be rescheduled.

I moved to my home on Jackrabbit in 2015. Mario was one of the first people I met in the neighborhood. I immediately felt comfortable with Mario and Italia as my own parents were born in Italy and I grow up with a similar background. I enjoy going over their house from time to time for coffee and conversation. Getting to know them and their views on what going on in the neighborhood and life in general has been a joy. Honesty, it reminds me of how I grew up and will always treasure that. It is such a terrible loss. I extend my sincerest condolences to Italia and their family.

34 years ago as a new resident to Scottsdale I went to get my hair cut at the Orange Tree barbershop. My life changed forever. I met a man who, not only cut my hair for the next 3 decades but, would be closer to me than most of my relatives. Mario became my therapist and one of the most opinionated close friends I would ever have! He loved interrogating whoever was sitting in his chair and drawing out their most intimate secrets!!! Politics and religion were mandatory subjects at Mario's!
He gave my daughter her first haircut 21 years ago and later his wife, Italia, would babysit her, spoiling her rotten with cookies, while I got my hair cut. The Tommasino's were so generous it was free wine with every hair cut. They lost money on me!
I was so shocked to hear of his passing. My world will be more empty without him. I offer condolences and huge sympathy to Italia and her children and grandchildren. I will keep Mario and you in my prayers.

I posted a photo of our Cabo trip in 2016. My dad loved spending time with his family! 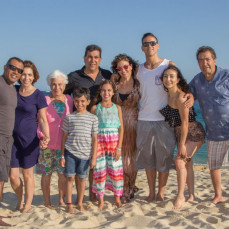 The services for Mario have not yet been added. Please sign up below to be notified when the services are ready.

The attached photos are added to the memorial of Mario Tommasino to help share their legacy.

Please help memorize Mario Tommasino by recording your attendance below.

Thank you for sharing your memory of Mario